Where did all the money go? WWF report analyses how Member States spent their ETS revenues

Ahead of the next Emission Trading System (ETS) trilogue this evening, part of the Fit for 55 negotiations, WWF is publishing a new report on ETS revenue spending. The report looks at how the system generates income for Member States and how they spent this money over the 2013-2021 period. WWF’s analysis finds the current system is full of flaws and that significant changes are needed - including much stricter rules on how EU countries spend their ETS cash.

The Emission Trading System, a decade of ‘polluters-don’t-pay’ principle

The Emission Trading System was introduced in 2005 with the idea of implementing a carbon pricing system for the power, heavy industry and aviation sectors, designed at incentivising decarbonisation. Nearly two decades later, however, enforcing the “polluter pays” principle remains a pipe dream. The WWF analysis finds that over the examined period (2013-2021), more than half of the ETS emissions (53%) were handed out to polluters for free through the so-called ‘free allocation’ scheme. These free permits to pollute were worth €98.5 - more than all the revenue that EU countries earnt through selling regular allowances. 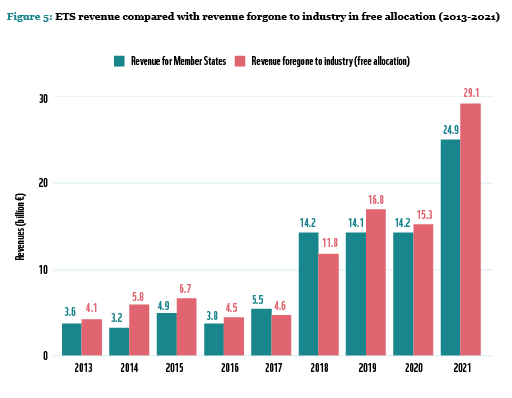 And while the average carbon price on the market for emitting one tonne of CO2 was €14, the real price industries paid, taking account of free allowances, was a measly €6.58. This is nowhere near the amount needed to trigger the huge investment in decarbonisation that should have happened. 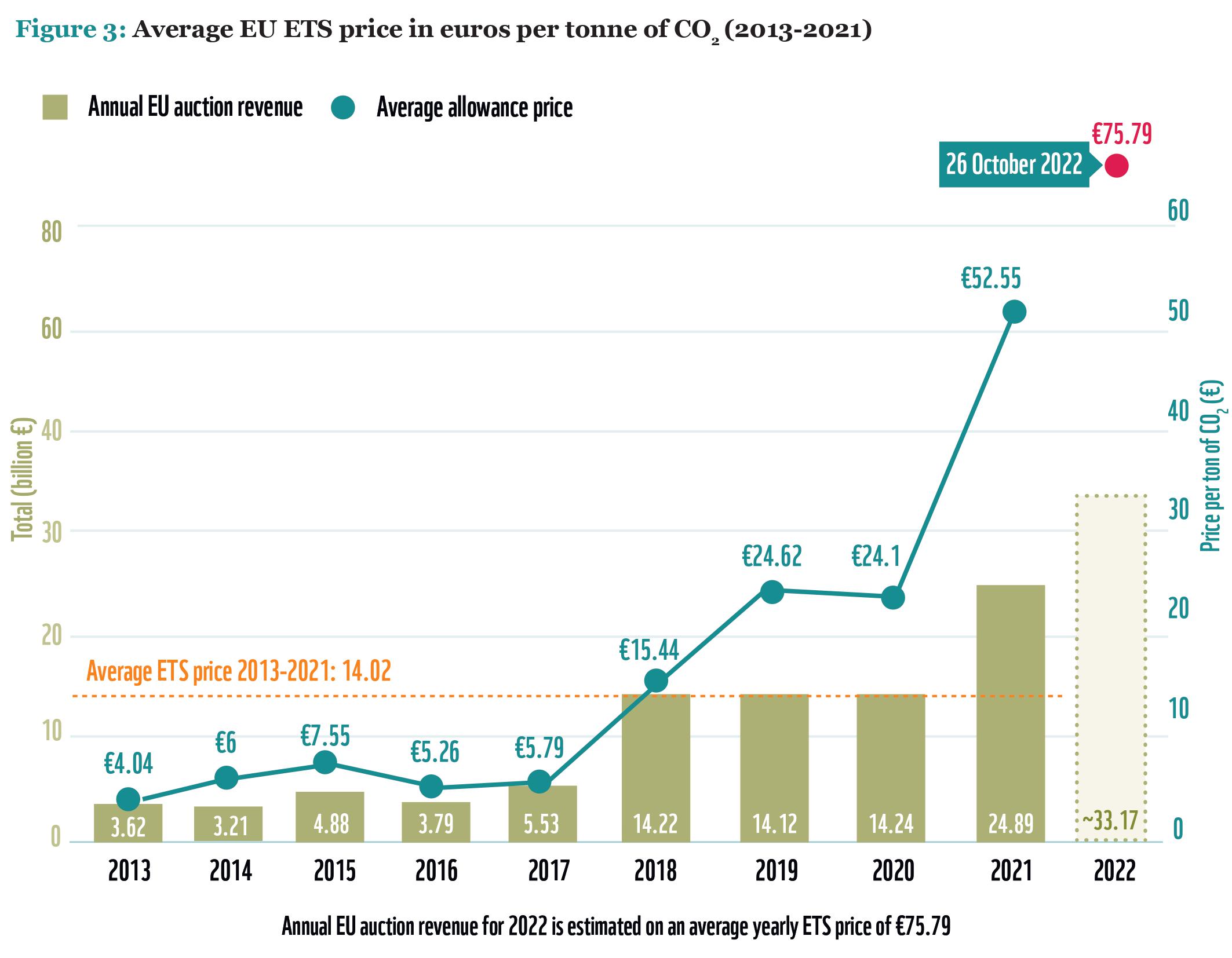 Romain Laugier, Policy Officer at WWF European Policy Office and lead author of the report said: “This analysis shows that for the last decade, the ETS was based on a ‘polluters-don’t-pay principle’ - with billions and billions of forgone revenue that EU countries could instead have invested in industrial decarbonisation. EU negotiators should phase out free allowances as soon as possible, and in the meantime make sure companies that receive them meet strict conditions on cutting their emissions.”

In the last few years, the carbon price has increased dramatically, and so have EU countries’ ETS revenues. Over the last nine years, EU countries raised up to €88.5 billion, which they could have spent on climate action and transitioning away from fossil fuels. However, WWF’s analysis found that €25 billion of this income was not spent on climate action, and another €12 billion was spent on projects that were either not sensible in climate terms or that could even have resulted in increased emissions, for example coal and gas infrastructure or carbon price compensation. The analysis was  made more difficult due to the considerable gaps and inconsistencies in Member States’ reporting . Very often, the information provided on how ETS revenues were spent is riddled with inconsistencies and mistakes - if it’s available at all. 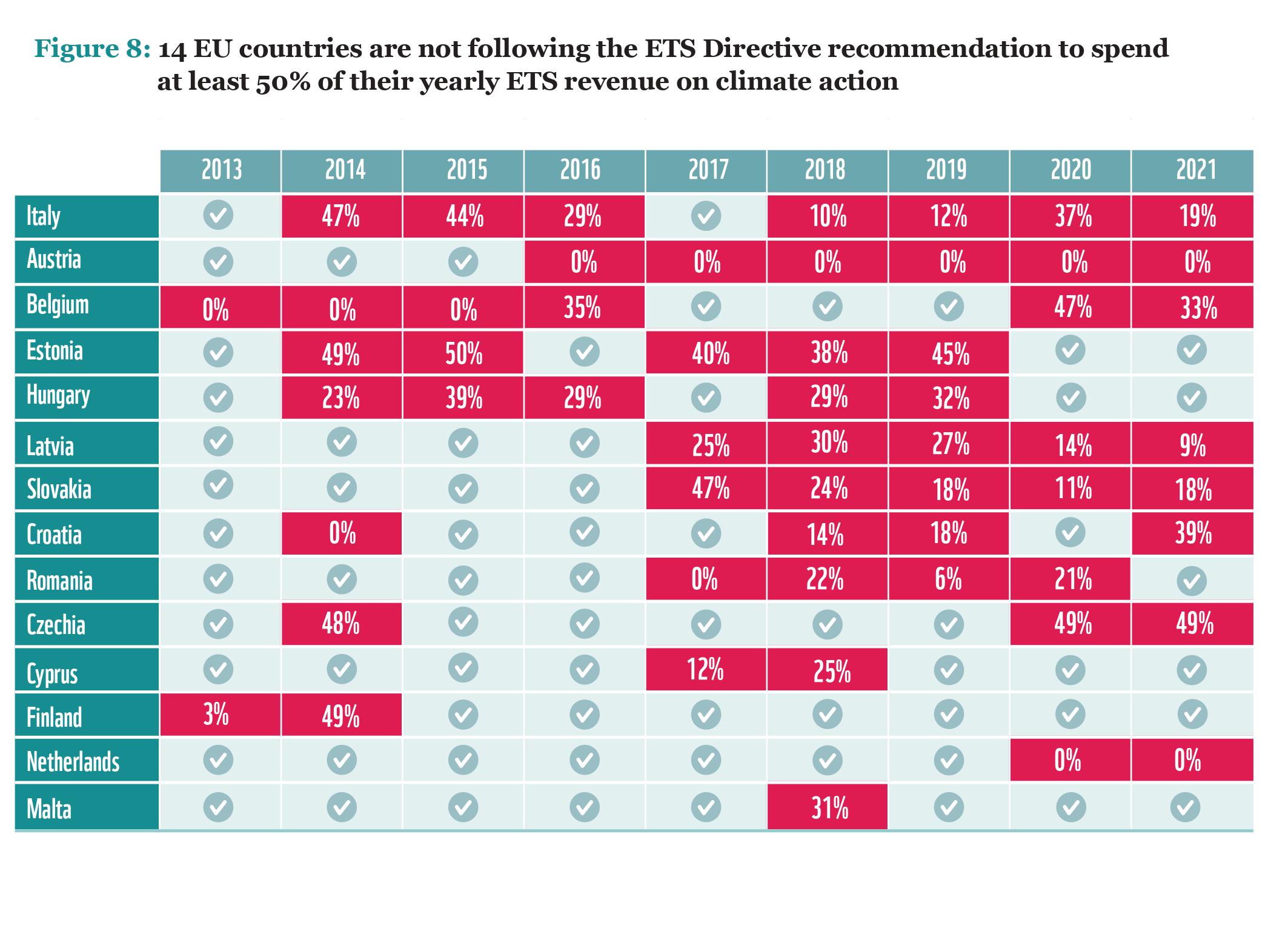 Romain Laugier added: “Of the money EU countries did raise from the ETS, at least a third was either not spent on climate action at all or was spent on projects of questionable value to the climate. It is clear that this whole system needs to be tightened, and the opportunity to do that exists today, during the Fit for 55 trilogue discussions. Countries should be required to spend 100% of the ETS revenues on climate action - and that has to mean something.” 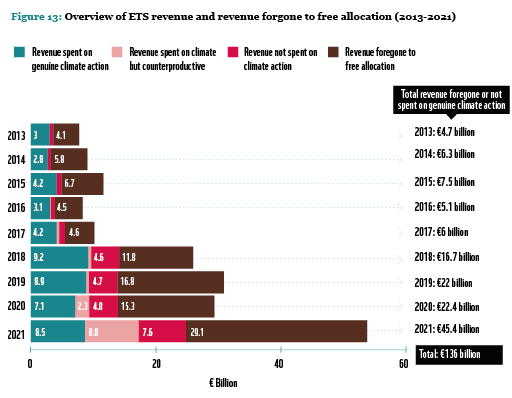 Heavy industry under the Emission Trading System did not pay for more than half of their emissions
Download
EU ETS revenues report 2022 - final
PDF
3.42 MB

Corporate Sustainability Due Diligence Directive: A Potential Game-Changer for Business and the Planet