Mediterranean countries have failed on a global commitment to protect 10% of their sea and to stop ongoing biodiversity loss in the region, a new WWF report shows. Today only 1.27 percent of the Mediterranean Sea is effectively protected, and mainly in the northern part of the region. WWF calls on governments, meeting next week (2-5 December) in Naples, to strongly increase investments and resources and restore unique marine habitats and species threatened by human over-exploitation and climate change.

WWF’s analysis demonstrates that in the last decade almost all Mediterranean countries have blatantly underperformed in their legal duty to create an adequate network of marine protected areas (MPAs) by 2020. Evidence shows that such a network would strongly contribute to restoring a marine natural capital that is estimated to generate US$5.6 trillion per year mainly through fisheries, aquaculture and tourism.

Next week, Mediterranean governments as Contracting Parties to the Barcelona Convention, will meet in Naples, Italy, to discuss their progress and agree on new post-2020 actions to halt and revert the loss of biodiversity. Set up in 1976, the Barcelona Convention aims to prevent and manage the risks of pollution and to protect the valuable marine biodiversity in the Mediterranean Sea. Four decades later, WWF’s report shows that the Convention and its Contracting Parties are failing their mandate and leaving the Mediterranean largely unprotected and overexploited by industries such as oil and gas, that remain on a trajectory for continued growth.

READ THE BRIEF and THE FULL REPORT


“The Barcelona Convention offers Mediterranean governments a unique and useful tool to work together, however it needs a transformative change.” says Giuseppe Di Carlo, Director of the WWF Mediterranean Marine Initiative.

“The recurring lack of investments and interest of countries towards biodiversity is seriously undermining the capacity of our sea to mitigate the impact of climate change and to sustain our blue economy. Mediterranean leaders must make biodiversity protection a top political priority and be committed to effectively protecting at least 30% of the Mediterranean by 2030”, adds Di Carlo.

WWF’s analysis highlighted recurring delays and failures by almost all Mediterranean countries in moving from paper parks to well-managed protected areas at sea. For instance, Croatia, Italy, Greece, Slovenia, and Spain designated a considerable amount of their marine areas for protection, but management measures are still limited to a few small areas or are inadequate to protect biodiversity. Other countries, like Albania, Algeria, Cyprus, Israel, Morocco, Montenegro, Slovenia and Turkey have limited their management efforts to few or very small MPAs. Egypt, Lebanon, Libya, Syria, Tunisia, and Monaco have not implemented or endorsed any management or monitoring plan in the areas they claim to protect. An insignificant portion of the sea, calculated at 0.03 percent is currently fully safeguarded from any human intervention. 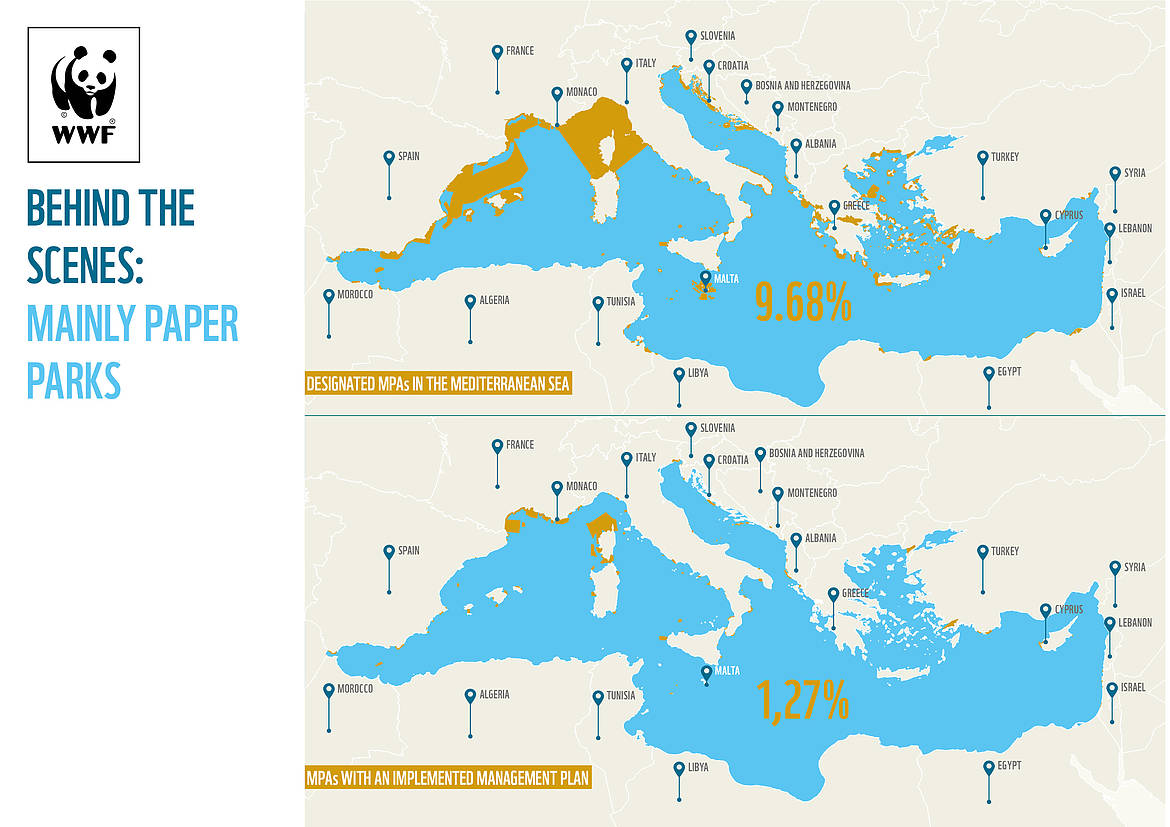 WWF’s analysis highlighted recurring delays and failures by almost all Mediterranean countries in moving from paper parks to well-managed protected areas at sea.