Sharks in the Mediterranean sea are the most at risk in the world, says WWF | WWF

Sharks in the Mediterranean sea are the most at risk in the world, says WWF

More than half of the species of sharks and rays living in the Mediterranean are under threat, with almost a third of them fished close to the level of extinction.

Rome, Italy - More than half of the species of sharks and rays living in the Mediterranean are under threat, with almost a third of them fished close to the level of extinction [1]. The worrying status of the marine predators is a clear signal of the overall declining health of the Mediterranean Sea, whose wildlife is decimated by overfishing, according to a new report by WWF.

Ahead of Shark Awareness Day (July 14), WWF’s new report “Sharks in Crisis: A call to Action for the Mediterranean” brings together the latest research to show how unsustainable and sometimes illegal fishing have depleted the population of sharks and rays across the region. A situation made much worse by lack of management and enforcement, poorly run markets and a general lack of data and knowledge.

“Sharks are at risk of disappearing from the Mediterranean. Their rapid decline is the most serious signal of the status of our sea and of irresponsible fishing practices.All Mediterranean countries are responsible for this. Sharks have been part of our sea and culture for thousands of years, we need to act quickly to ensure they remain in the future”, said Giuseppe Di Carlo, Director of the WWF Mediterranean Marine Initiative.

As shown in the report, overfishing is the single biggest threat to Mediterranean sharks and rays and every type of fishery is responsible. Two Mediterranean countries stand way ahead of the others in catching sharks: Libya (4,260 tonnes) and Tunisia (4,161 tonnes) report around three times as much as Italy (1,347 tonnes) and Egypt (1,141 tonnes). Some species are directly targeted and find their way to the market, while much of the rest is caught as bycatch (unwanted catch) and simply tossed back into the sea to die. More than 60 species have been recorded in trawls, while in some areas sharks and rays represent more than a third of the total longline catch. Enormous numbers are caught by driftnets, which are illegal and the critically endangered great white sharks are found in the net of purse seiners. Even small-scale fisheries using trammels and gillnets can see a significant proportion of their catch made up of sharks and rays.

In addition to fishing, other threats are increasingly worsening the status of sharks in the Mediterranean. Among these are plastic pollution, with sharks ingesting or becoming entangled into plastic items, and seafood frauds. DNA testing has shown that many consumers who think they’re eating Mediterranean swordfish, for example, will in fact be tucking in to a plate of illegally marketed shark meat. This has also health risks for consumers, due to mercury levels that are far above safe legal limits in some shark species.

Sharks are particularly vulnerable animals and struggle to recover from population decline. They tend to be slow growing, late to mature, and produce few young after long gestation periods. This means that overfishing can destroy stocks, which then fail to regenerate. This is what is happening all over the Mediterranean.

“There is no time to lose, added Di Carlo. We want to work with fishers and governments to improve the management of our fragile marine resources and adopt effective solutions to stop the wasteful practice of shark bycatch”.
In this report, WWF highlights a number of solutions that fishers and fisheries managers should consider; from avoiding critical shark and ray habitats (such as nursery areas) to using adapted gear in order to eliminate bycatch. Improving the knowledge on shark and ray populations and data collection on traded species will also be important to increase conservation efforts and ensure full transparency and legality in the fishery sector.


[1] 20 species of sharks and rays are critically endangered including also the Great White Shark, Blue Shark, Porbeagle, Shortfin Mako, all three species of Angel Shark and the endemic Maltese ray. 11 species are endangered including both species of Thresher sharks, Sandbar Shark, Basking Shark, Guitarfishes and Devil Ray. 8 species are vulnerable including Tope Shark, and all three species of Smooth-hounds. Another 13 species are so scarce that they are data deficient and more studies are needed to evaluate their status and conservation measures, this includes Dusky Shark, Bigeyed Sixgill Shark, Sharpnose Sevengill Shark, and Marbled Stingray. 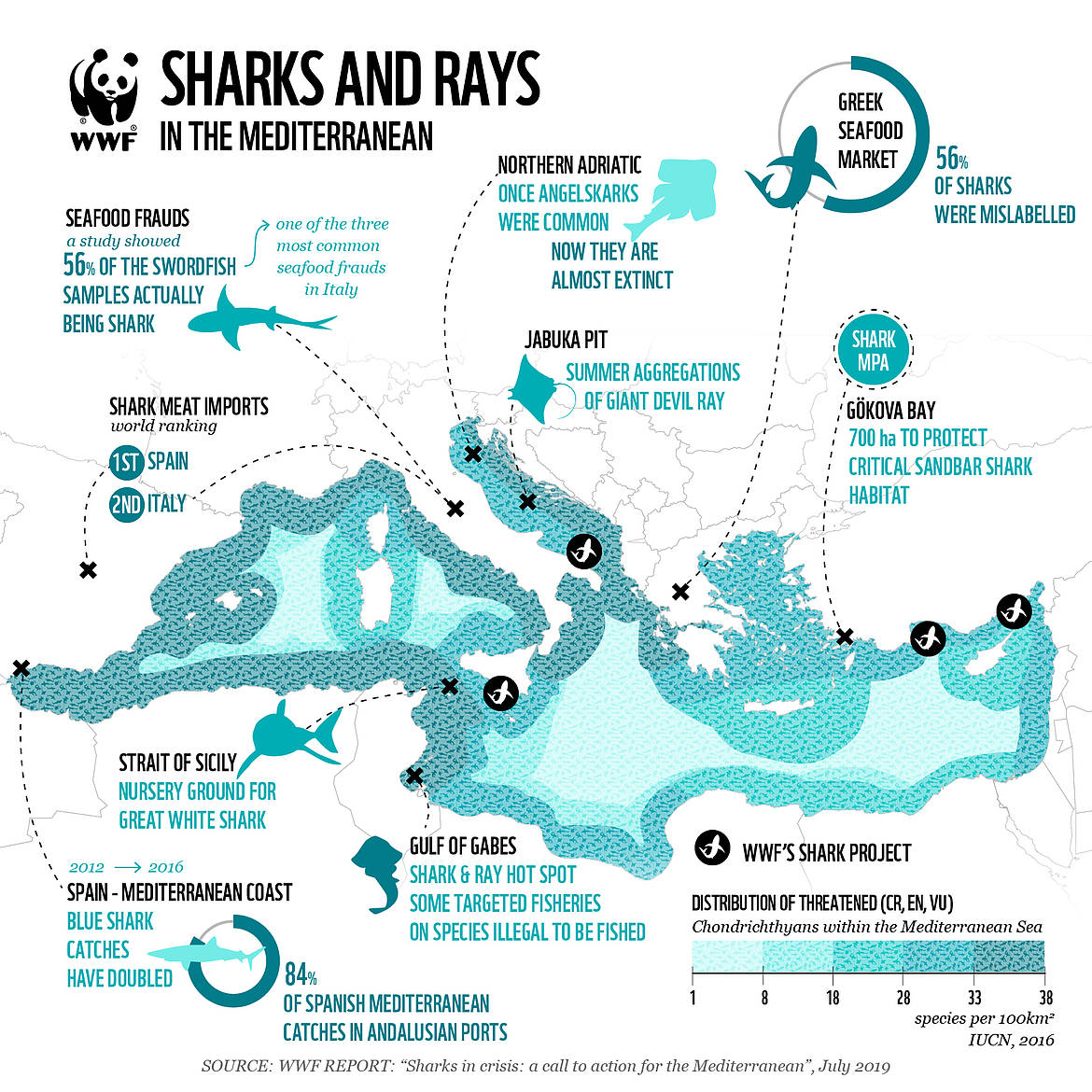 The Status of Sharks and Rays in the Mediterranean